"The pillows began with the illusion of air captured within a hard surface. Every pillow expresses an "in breath," creating the expansive feeling of aliveness."

While Davis explored the idea of capturing air within a clay body, soft shapes evolved. It was as if the idea created itself. From there, she gave every container a lid to keep the air inside. The pillow shapes have become a "canvas" for self-expression, both sculpturally and graphically.

Each pillow is individually hand built with earthenware clay. The overall surface is covered in terra sigillata, producing an eggshell finish. Then, the stamped areas are decorated with underglazes, overglazes, and sometimes metallic glazes. The inside of each sitting and standing pillow is glazed. Only the wall pillows are not glazed on the inside. Each piece requires multiple firings.

Davis received a BA from Rutgers University. She had a long career as a senior art director for Time Warner Publishing in New York City. After leaving this career, she discovered ceramics at the Armory Arts Center in West Palm Beach, Florida, where she studied with Harvey Sadow. She also found great value in workshops with hand-building ceramic artists including Sandy Pierantozzi and Lisa Naples. 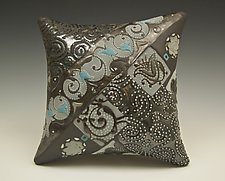 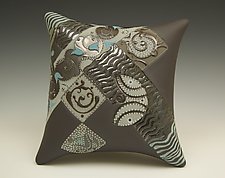 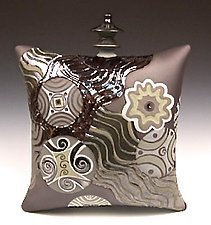 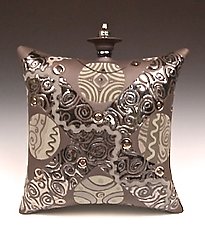