On a trip to Italy 10 years ago, Kim Eriksson found the views inspiring, literally. "As soon as I returned, I had to buy a set of oil paints," she says, and she hasn't stopped painting since.

Each of her works is created with layer after layer of oil paint over a base of joint compound and acrylic gesso on canvas. Preferring spontaneous inspiration over careful deliberation, the artist usually begins with an idea of a landscape inspired by travels or the land where she grew up but says that the outcome usually has very little to do with the original concept. 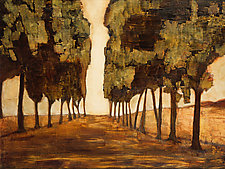