"The key to my evolving style is discovery resulting from progressive experimentation, combined with the clarity to produce my ideas."

Nick Edmonds has been a sculptor for more than 40 years. His aim is to create each piece in such a way that it moves and flows even after it has left his studio. Edmonds's work often surprises the viewer because it depicts something not seen in art before. His three-dimensional landscapes stand as mini gardens ready to fascinate. His landscapes have a lot to do with monumentality, or the idea of making a thing resemble something much bigger. Each sculpture is an environment that draws the viewer in, inviting contemplation.

Edmonds's sculptures are made from a complex assortment of joined forms in wood. In the 1970s, the artist traveled to Japan to learn firsthand from carpenters who were reconstructing an ancient temple. After eight months of observation, Edmonds learned much about traditional Japanese woodworking techniques and joinery. Thirty years on, he's still applying these techniques in his sculpture. The challenge at first is to make a piece exist as a 3-D version of a drawing. To produce his freeform shapes, Edmonds uses a progression of tools, from chainsaw, band saw, electrical drills, planes, and grinders. He then hand carves the surfaces with scores of chisels and gouges. Demarking the sculpture with lines provides a timeless and monumental quality. Edmonds's recent work has evolved from carved wood surfaces to polychrome painted sculpture. 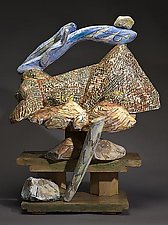 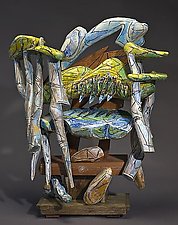 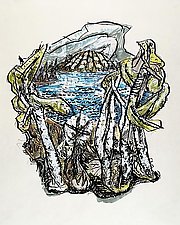 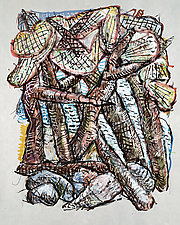 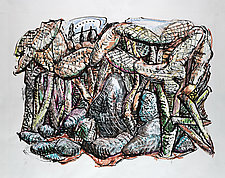 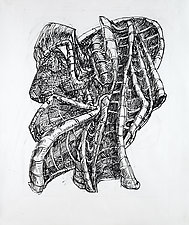 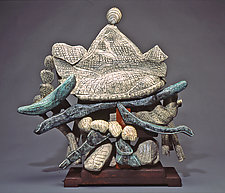 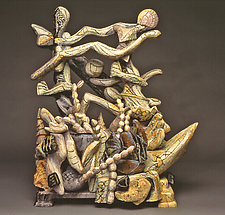