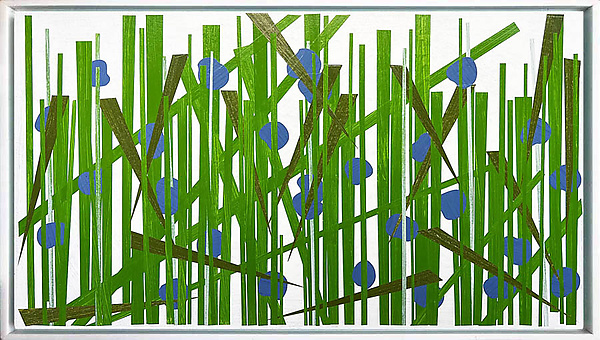 Created by Chris Wheeler
Wheeler's art is a visual record of events that take place. He tries to capture the moments of perfection once they show themselves. He sets himself to work on an idea and almost immediately a tension develops between artistic control and trying to stay out of the way. Wheeler's found that the most satisfying work is the work that is most difficult to resolve. And successful work is that which best reflects the process of creation. The imagery comes from a long-standing commitment to modernist conventions. The simplistic imagery is an attempt to tap into places we've been that linger in our memories. He's found is minimalist designs appeal to people on a primitive level. Because of this, anyone can easily understand his work. It may look childlike but not childish.

The artist first starts by stretching handmade paper made of cotton, mulberry and straw, on large 4x8 boards. Medium body acrylics are then used to texture the surface, however sometimes the paper is left in its natural color to add an organic element to the artwork. Each shape is then cut freehand giving the piece's crisp edges as well as organic character. Wheat paste that is shipped from Japan in a powder form, is boiled down with water and then pushed through a horse hair strainer to remove all fine lumps. The glue is then applied with a wide brush to the back of each piece and placed on the artwork making sure that all excess glue and bubbles are removed between each application. This technique is only known by a handful of artisans in the United States and traditionally used to restore antique shoji screens and scrolls.