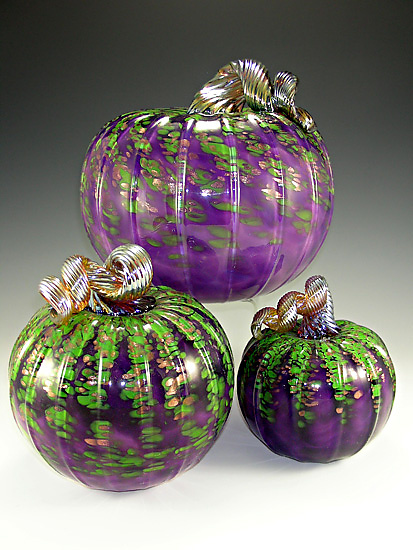 Created by Mark Rosenbaum
Rated 5 based on 1 customer reviews
Each comes with the following "Legend of the Mardi Gras Pumpkin" : "A legend is told of a magical occurrence three-hundred years or so ago. In the mysterious backwaters of the Barataria bayous in Louisiana, a crop of spectacular golden pumpkins was discovered. The valuable vegetation grew in the murky area that was believed to be the secret hiding place of ill-gotten pirate treasure. This incredible discovery remained a mystery until the present day. After Hurricane Katrina, a new harvest of incredible pumpkins surfaced along the bayous. The pumpkins were not golden, but multicolored in hues of purple, green, and gold. Experts have analyzed the phenomenon and have speculated that high concentrations of Mardi Gras beads and doubloons found deposited near the colorful treasures enhanced their growth. Still a mystery, scientists have named them Curcubita Festivalis. Those lucky enough to own one call them "Mardi Gras Pumpkins"! Mardi Gras Pumpkins are colorful, beautiful and bring happiness to those who are fortunate enough to have them. They report that their lives after finding Mardi Gras Pumpkins have been enhanced by love, blessings, good friends and good vibes.
you may also like