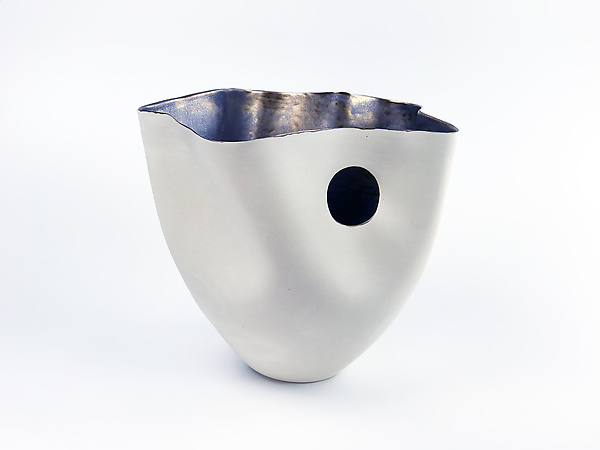 Created by Jean Elton
This graceful work symbolizes the portal to gold that each of us have.

The original model for Jean Elton's Tall Vase was turned on a plaster wheel, from which a casting form was made. The casting form is one piece, which enables the final work to be cast without seams, which often cannot be otherwise eradicated from the final work that customers acquire.

Coming out of the form, the Tall Vase in-the-making is molded by the artist according to the final shape and design elements the particular work is to feature, and then dried. Once dry, the Tall Vase is fired first to approximately 1800 degrees F, after which any remaining fine alterations can be made with reduced risk of loss due to breakage. A second firing to about 2100 degrees F brings the process to completion.

First inspecting the outside to ensure that it will withstand scrutiny as a Pristine exterior, the artist applies by hand-brushing on those that pass this test, a metallic glaze on the inside of the work. The application is intentionally uneven to induce subtle variations in the final appearance.

This metallic surface is not safe for food service, the microwave or a dishwasher.

A certificate of authenticity provided with the sale of each Jean Elton work displays that work's unique serial number found on its underside. Both the work and its certificate are signed by the artist.
you may also like