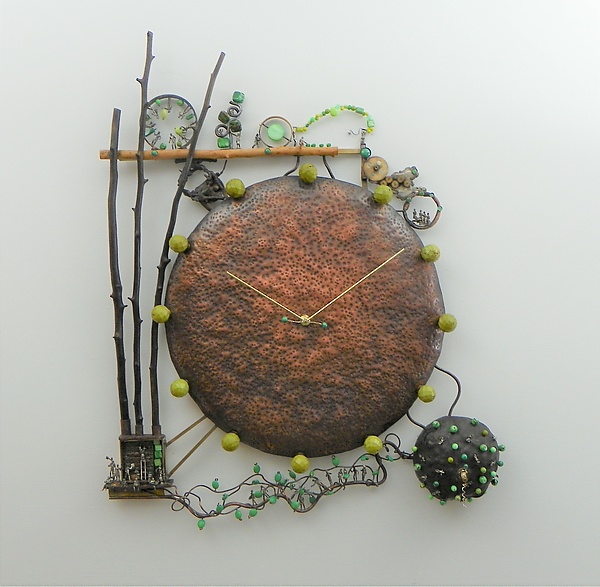 Created by Mary Ann Owen and Malcolm Owen
The Owens present another masterful one of a kind wall clock with an ecological theme. The copper clock face is 13" in diameter; hand hammered to create a pleasing surface and texture. The numbers are marked with large jade beads. The lower right component of the design consists of a hand formed copper "Earth" with 12 tiny silver babies and 24 assorted green beads. The "Earth" has a separate clock movement (also "AA" battery included) which has only a second hand to indicate the swift passing of time.

Twelve silver adults wind along the pathway at the bottom of the clock among green "leaves" and eventually reach the left side of the clock where the education center stands. More tiny silver figures holding books explore the vast library. Above the library are three pear wood branches made elegantly dark by lightly charring the wood, then waxing it to create a beautiful glossy and rich black.

The top of the clock is the action center. More tiny, cast silver figures churn up ideas and actions with assorted green beads and stones including malachite, jasper, jade, glass, mother of pearl, chrysoprase, and turquoise. There are a total of 57 cast silver figures on the clock. The entire piece is colored with a liver of sulfur patina, then waxed to create a permanent finish. The clock sends a strong and powerful message as well as looking fabulous!

The clock mechanism is "set and forget", runs on three "AA" batteries (included) and will set itself when the time changes. The second hand is incremental and makes a very slight ticking sound.
you may also like