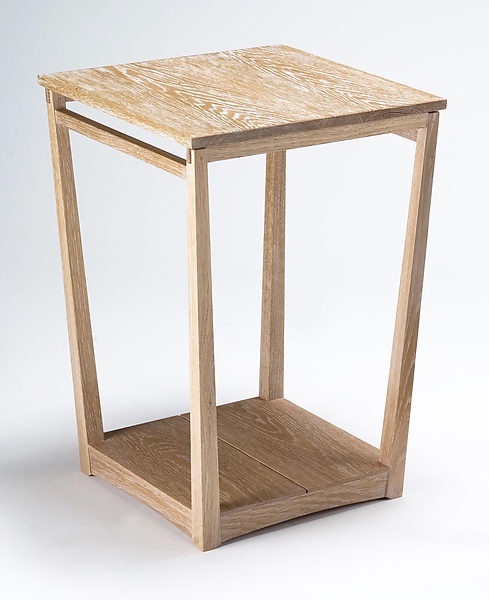 Created by Eben Blaney
Like the English style barn frame that inspired this design, the "Tapered Frame" side table is angular, open, and airy, yet surprisingly dense in finer details. The reverse- tapered legs grow increasingly slender towards their tops where they are connected on two opposing sides to horizontal top rails by way of pegged mortise and thru- tenoned joints. The other two rails are joined to the legs slightly lower, creating a space just below the top and an offset for the joinery of all four sides to coexist.

The lower shelf is composed of two pieces which serves both a functional and aesthetic purpose. Because the outside corners of this two-piece shelf are precisely fit to the legs, the gap between boards provides necessary room for wood expansion and contraction. The gap also gives a simple, clean visual break to the surface. The shelf rests on top of -- and is connected to-- the four rails that join to the legs at their bottoms. Each rail is shaped on its lower edge to create a subtle arch shaped space at the floor.

The "Tapered Frame" side table design came to Blaney after working on a timber framing project. He was inspired by the combination of angularity, airiness, and joinery detail in the English style barn frame that he helped cut and erect. Blaney wanted to also capture some of the character and texture of the wooden beams of the barn so he filled the open pores of the white oak grain of the "Tapered Frame" with white pigment to accentuate it- a process called cerusing. He left some of the marks from the subsequent hand scraped finish to add more texture and character before finishing the whole table with a hard oil/wax finish.
you may also like