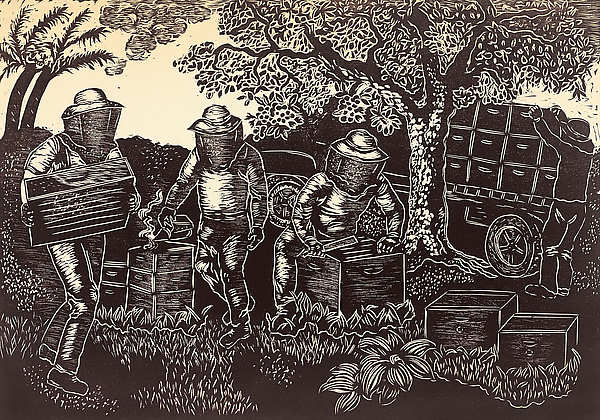 Created by Andrea Pro
The Hawaiian Honeybee Series woodcut prints were commissioned by Big Island Bees to share the story of their relationship with honeybees in producing exquisite honeys from the nectar of three of the Hawaiian island's most widespread trees. "The Beekeeper" is a homage to the 1568 drawing of the same title by Dutch artist Pieter Bruegel. In this Hawaiian version, the artist recreated Bruegel's distinct composition and added modern day implements and technology. The tree is modified slightly to evoke the wilelaiki tree. Some scholars believe the foreground plant in Bruegel's image is an indigenous plaintain, which the artist transformed into the endemic Hawaiian plantain, kuahiwi laukahi, which is endangered. The palms in the upper left corner are a feature of the Kohala wilelaiki bee yard. This is a woodcut print on Rives archival paper. Ships in a tube.
you may also like