"I have been blowing glass for over 25 years, and over that time, I've come to realize a very simple thing: vases are meant for use. "

Richard S. Jones believes that making a vase is not just making another object of home decor, but creating an exquisite frame for flowers. It is an opportunity to engage a dialogue between vase, craftsman, landscape, flower, arranger, and guest. It is a bridge between human-built architecture and the natural landscape.

Explorations of form and color have always marked Richard S. Jones's glass artistry. The fact that the work is handblown using traditional glassmaking techniques is an integral part of each design, allowing for a wide variety of designs and imbuing each piece with subtle but significant features. In all his pieces, he seeks balance, harmony, and a sense of peace—objects that bear witness to the silence inherent in all things.

Jones's life as an artist began early with drawing lessons from a neighbor, which propelled him on a path that led to a BFA in glass from the Rhode Island School of Design in 1988. He has since worked for and with other glass artists, and in 2006, he took over full ownership of Studio Paran in Madison, Wisconsin. 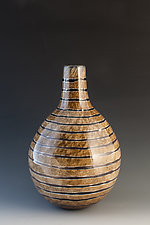