"I just love to make glass—anything, anytime, anyway possible. I make work that has secrets and surprises, almost hidden details that require the viewer to interact with the piece, turning it over in their hands, then finding something beautiful."

Michael Egan has been blowing glass in Vermont for more than twenty years. Having studied with Italian and American glass artists, Egan's work can be called neo-Venetian. He looks to the patterns found in nature and math to inspire his designs. He likes classical shapes that have contemporary colors and patterns, and he makes only pieces that he would like to have or receive as a gift. The glassmaking process is really fun for him, so he bases his aesthetic on the fun, playful, and whimsical aspects of design.

Using a wide array of techniques, Egan blends clear glass with colored glass, drawing and twisting large masses of glass into fifty-foot rods. He also explores the art of making and using murrini, a technique based on the production and slicing of complex glass rods to reveal their cross sections. These pieces are then encased with clear glass to create underwater wildlife scenes.

Michael Egan received a BA in sculpture at the University of Vermont in 1991. He then began working at a hot shop owned by Alan Goldfarb, an amazingly talented glass artist and mentor. Eventually, he was hired on as first assistant, later running Goldfarb's second workstation as glassblower while solidifying hand skills and developing his own creative aesthetic. He has been privileged to study with many glass artists, including Richard Marquis, Jack Wax, and Lino Tagliapietra. 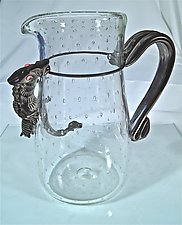 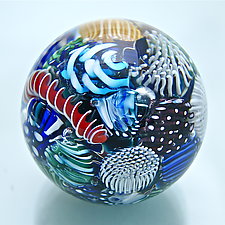 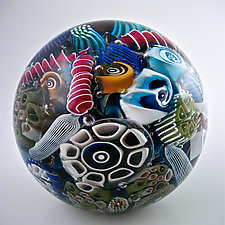 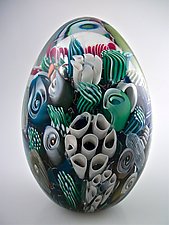