"Our locally sourced Canadian materials are a key to the success of our work. In particular, we are drawn to the rich natural spalting patterns that can be found in aged wood. By embracing nature and aging, we can create pieces with a balance between form, function, and the incredible variation found in nature. "

In the early 1980s, Don Stinson made a living turning wooden bowls and making furniture in a hundred-year-old horse stable. Since then, the business has grown in size and gained international recognition. What was once a one-man show has evolved into a two-generation family business that shines internationally while still keeping true to the heart and roots of the business.

Stinson Studio's success lies in striving for continual balance—a balance mirrored in the different aesthetics and skill sets brought by Don and his sons, Jesse and Spike Stinson. Both Jesse and Spike could be found in the shop working by their dad's side as far back as they can remember. Jesse joined him as a partner in 2007, and Spike several years later.

Don, Jesse, and Spike Stinson feel the most important aspect of their art is capturing the natural world they live and work in—the world that they truly love. With every piece they create, they strive to bring a part of this world to the people who buy and enjoy their work. 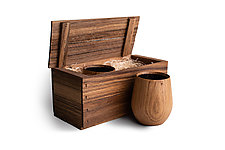