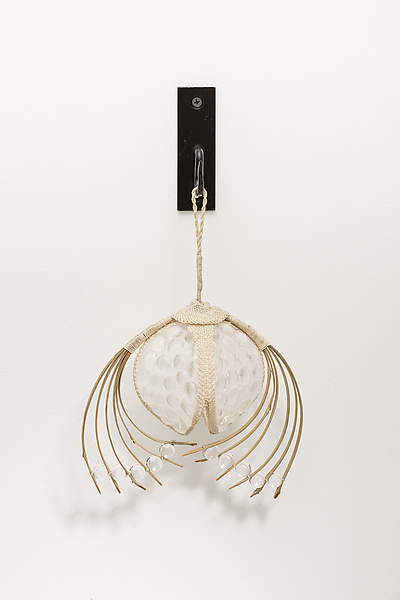 Created by Charissa Brock
"Mimos" is made from waxed linen thread, fused glass, and some black bamboo, called Phyllostachys Nigra Bory, or Tiger bamboo, gathered from the Portland region. The shape of the bamboo elements in the piece, the long split lengths of bamboo, are made using a five-part traditional splitting technique. After creating "Milli Oculus", the artist was interested in using the oculus technique elsewhere. The pod-like form comes from looking at plant pods and insect forms, especially the way some insects mimic a plant form. She loves the feeling of not knowing the true nature of an object. The fiber in this piece is made from a technique called knotless netting. Although "Mimos" has a wall hook, the owner can hang it from a wall mounting of their choice.
you may also like