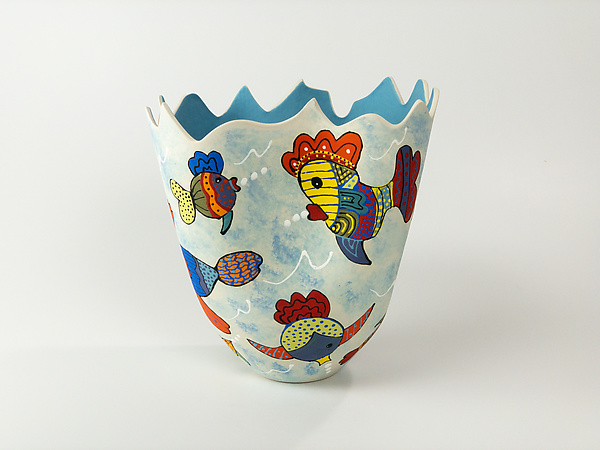 Created by Jean Elton
This whimsical work depicts party time under the sea!

This is the most popular shape designed and made by Jean Elton, and, despite the name, some variations of the form are less 'tall' than others. The Tall Vase materializes as everything from strong, imposing pieces such as this one, to diminutive, delicate ones -- with still other varieties as well.

The original model for the Tall Vase was turned on a plaster wheel, from which a casting form was made. The casting form is one piece, which enables the final work to be cast without seams, which often cannot be otherwise eradicated from the final work that customers acquire.

Coming out of the form, the Tall Vase in-the-making is molded by the artist according to the final shape and design elements the particular work is to feature, in this case the fish caricatures. Once dry, the Tall Vase is fired first to approximately 1800 degrees F, after which any remaining fine alterations can be made with reduced risk of loss due to breakage. A second firing to about 2100 degrees F brings the process to completion.

The interior of the work is with a solid, vibrant underglaze, while the exterior is with creating a whimsical, underwater party scene!

The finish is matte to satin, resulting in a sophisticated, contemporary look that allows the work's vivid colors and design to radiate in any lighting environment. Emerging from its second and final firing at just over 2100 degrees F, the is complete.

A certificate of authenticity provided with the sale of each Jean Elton work displays that work's unique serial number found on its underside. Both the work and its certificate are signed by the artist.
you may also like