"My influences include Japanese Haniwa and Chinese Xian Tomb and T'ang Dynasty ceramic sculpture, as well as other modern masters such as Marino Marini and Pablo Picasso."

Since pre-history, the horse has fascinated artists as a symbol of wealth and power, sensuality and independent spirit. The horse has become a personal symbol for Jeri Hollister. She considers it to be a satisfying subject that provides challenges and direction.

Hollister builds each piece from the ground up. She starts by extruding long, hollow shapes and throwing closed forms on the wheel. She then cuts and tears the thrown and extruded parts, reassembling them to form the legs, body, neck, and head of the horse. She works intuitively with the parts, altering them in a somewhat random manner, allowing the pieces to contribute to the shape and posture of the animal. Hollister is interested in allowing the evidence of the ceramic processes to be prominent in the finished piece. She wants the viewer to have a sense of how the sculpture evolved as well as the energy involved in the building process.

Jeri Hollister grew up in Michigan and received her BA and MFA degrees from the University of Michigan in Ann Arbor. She exhibits nationally and has won numerous awards. Her work can be found in many public and corporate collections and has also been published in several books. 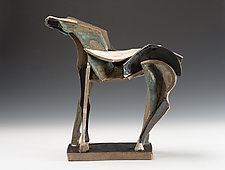 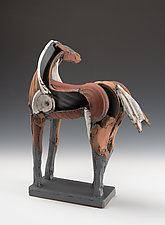 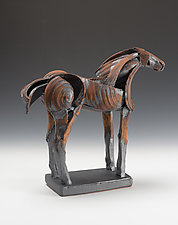