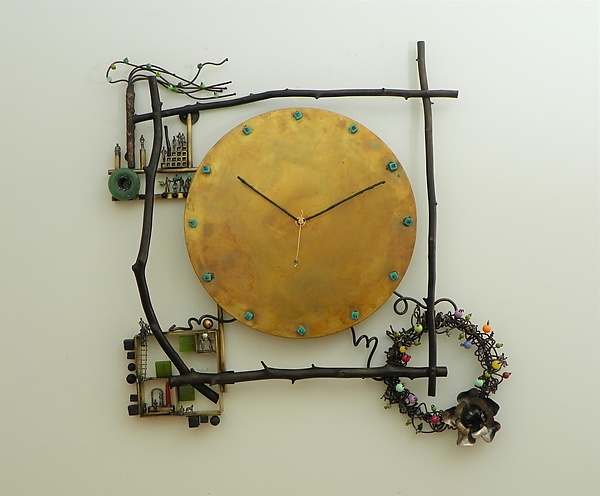 All in Good Time

Created by Mary Ann Owen and Malcolm Owen
A striking and unique wall clock created by the Owens. The 11" brass clock face has numbers marked with ceramic and agate beads. A framework of charred then waxed pear wood sets the stage for three small complex scenes, each with its own mysterious narrative. Thirty-seven tiny, cast sterling silver figures are in the scenes. The beads, which add color and interest to the piece, include agate, chrysoprase, malachite, lava, onyx, jade, aventurine, glass, and ceramic. The metal portion of the clock was first assembled then immersed in a dark patina. After drying, the clock was waxed and portions highlighted for emphasis. The waxed finish is permanent and durable, requiring only occasional dusting. The wooden framework was added last and is attached by tiny screws. The clock mechanism runs on three AA batteries which are included and will set itself for time changes.
you may also like